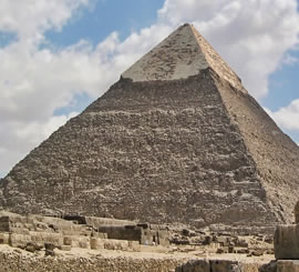 Moses Believes in You
The worst part about not keeping a good resolution is not keeping a resolution. Each time I don’t follow through, I lose a little bit of faith in myself. And I’m a resolution junkie. My latest resolution was to not look at my phone while I’m writing. Whatever and whoever it is can wait. My flow is so much more effective without distraction. Wait, wait—my phone just whistled.

When I make resolutions, they make so much sense. I’m excited by them. They promise me more effective living, spirituality and self-discipline. However, when the time comes to implement my resolution, I have to fight my inner resistance.When I make resolutions, they make so much senseSo, while many of my resolutions have become second nature, some have yet to be woven into my lifestyle.
Pharaoh is the Torah’s paradigm for resistance to change. He was addicted to his status quo, even when his behavior became self-destructive.

Come to Pharaoh, for I have hardened his heart and the heart of his servants, in order that I may place these signs of Mine in his midst, and in order that you tell into the ears of your son and your son’s son how I made a mockery of the Egyptians, and [that you tell of] My signs that I placed in them, and you will know that I am the L‑rd.1

Moses went to Pharaoh with the following message:

So said the L‑rd, the G‑d of the Hebrews, “How long will you refuse to humble yourself before Me? Let My people go, and they will worship Me. For if you refuse to let [them] go, behold, tomorrow I am going to bring locusts into your borders. They will obscure the view of the earth, and no one will be able to see the earth; they will eat the surviving remnant which remains for you from the hail, and they will eat all your trees that grow out of the field.”2

Pharaoh’s servants dreaded yet another destructive plague. They pleaded with Pharaoh, “How long will this one be a stumbling block to us? Let the people go, and they will worship their G‑d. Don’t you yet know that Egypt is lost?”3

Ultimately, Pharaoh was not willing to let the men, women and children leave, and the plague of locusts ensued. I’d imagine that the servants of Pharaoh were quite annoyed that he didn’t listen to them. They had a perfectly logical argument: Egypt was lost! The plague was not worth the extra national revenue from Jewish labor.

Pharoh initially conceded. He told Moses and Aaron, “Go, worship the L‑rd your G‑d. Who and who are going?”4 But when the negotiations unfolded, Pharaoh was only willing to let the men leave. Moses had made it clear that he wanted everyone to be freed, and he wasn’t interested in Pharaoh’s lame offer. Pharaoh didn’t budge, and he suffered the consequences.

After all, G‑d told Moses, “Come to Pharaoh, for I have hardened his heart and the heart of his servants.” If G‑d hardened Pharaoh’s heart, did he choose freely, or was his course of action predestined?

It’s hard to believe that G‑d did take away Pharaoh’s ability to choose. If Pharaoh didn’t choose to further enslave the Jews, why was he punished? Why was the entire country punished? How could Pharaoh be held accountable for something that was out of his control?

Seemingly, Moses believed that Pharaoh could let the Jews go, if he desired as much. He warned Pharaoh, “For if you refuse to let [them] go, behold, tomorrow I am going to bring locusts into your borders.” Why would he warn a man who was predestined to reject his warning? He could have just presented the plague as a consequence: “Your country will suffer from an infestation of locusts because you refused to free the Jewish folk!”

And there was another curious dynamic that played out before the plague of locusts. Although G‑d told Moses that He had “hardened Pharaoh’s heart and the hearts of his servants,” this was the first conversation where the servants were visibly moved by Moses’s warning. They pleaded with Pharaoh to reconsider. Even Pharaoh himself began to shift and negotiate a deal for the Jews’ release. If G‑d said He would harden Pharaoh’s heart and the hearts of his servants, why did they ask that the Jews be released?

Pharaoh made many selfish, cruel choices—certainly cruel to the defenseless family of Jacob, and even cruel to his own subjects. Moses begged him and warned him. The plagues traumatized Pharaoh’s nation. Yet he wouldn’t let go; he was the king, and he wasn’t going to change his mind. So, after seven plagues, G‑d punished Pharaoh by hardening his heart. A soft heart is sensitive, in sync with other people’s needs. For a soft-hearted person decisions are not ego-driven, but conscience-driven. Now that G‑d hardened Pharaoh’s heart, he would find it even more difficult to concede his mistake and let go. “Don’t confuse me with logic,” he told his advisers. “It’s my way or the highway.”

Pharaoh was headed for a train wreck.

When we compromise our integrity, we cause something to shut down inside. When we hurt someone, our sensitivity wanes a little bit. This creates a vicious cycle of dysfunction. The Talmud says it succinctly in Ethics of our Fathers:5“One mitzvah leads to another mitzvah, and one sin leads to another sin.” Repetitive behaviors happen because our heart is naturally hardened with each bad choice we make. The first time we are destructive to ourselves or to others, we may feel sick with guilt. The second time it happens, instead of feeling worse, ironically we feel less guilty. The conscience is muffled.

In the When we hurt someone, our sensitivity wanes a little bitthird section of the Tanya, Iggeret ha-Teshuvah, there is discussion about a person who is so far gone that it’s almost impossible for him to make amends with his Creator. He’s crossed a line that’s stripped him of his sensitivity, and it’s as if G‑d Himself doesn’t want his repentance. Of course, G‑d does want repentance, even from someone who’s violated his relationship with his Creator in the most severe manner. But G‑d makes it more challenging for him to return. He seemingly rejects the gesture of return. The returnee will have to work a little harder to restore his compromised relationship. But no one is too far gone. Not even Pharaoh.

Moses tried to pull Pharaoh out of the mire. He warned him to reconsider the Jewish plight, because he believed that Pharaoh could change. But Pharaoh chose not to push himself, and fell back to the status quo.

A Jewish leader, a Moses, believes firmly in human choice. And all humans arenot created equal; we don’t have the same choices to make. Some of us feel compelled to self-destruct, and will in all likelihood do it over and over again. Some of us get in the habit of feeling superior to other people, and that arrogance only grows with us. Some of us have been alienated from our Jewish identity for so long that it doesn’t mean that much anymore. Moses finds the kernel of free choice inside of everyone, the place of strength. Even if we don’t believe in ourselves, Moses believes in us and cajoles us to rethink our choices.6

Perhaps this explains how the Lubavitcher Rebbe, Rabbi Menachem Mendel Schneerson, was able to bring about a Jewish revolution in this post-Holocaust era. That shouldn’t have happened—Jewish identity should have waned. Assimilation breeds more assimilation, and Torah observance could have become more and more irrelevant. Yet I am a living product of the Rebbe’s revolution. My parents were non-observant college students when they met the Chabad emissaries at their respective universities. Eventually, they both became Torah-observant Jews. Hundreds of thousands of young Jews have had the same experience. The Rebbe’s impact on Jewish society is exponential and explosive.

The Rebbe believed that even if a Jew felt that Judaism was irrelevant, there was always a place inside where he or she cared very deeply about being Jewish. He spoke to that sensitive place, and slowly the layers of indifference peeled away. “I didn’t want to marry him”The Rebbe took hardened hearts and made them tender. And he led by example. He taught his students to look out for the sacred space in every Jew that can never be repressed.

When I was in the NICU with my daughter, I met a wonderful speech therapist. “Do you know Rabbi Lieberman?” she asked me.

“He saved me from marrying a non-Jew.”

“Well, we were dating, and it was getting serious. My parents forced me to speak to Rabbi Lieberman. I told the rabbi that my parents, my grandparents and my aunt were all pressuring me to break up with him. He looked at me with intensity and said, ‘Lauren, forget about what your parents want and what your grandparents want. What do you really want?’ At that moment, I realized that I wanted to marry a Jewish man and have a Jewish family. I didn’t want to marry him.”

Trust is a gift. It is more empowering than a thousand lessons of instruction. I’m grateful to the Rebbe for trusting that every Jew has radiant potential.