Who Believes in Moshiach (Messiah)? 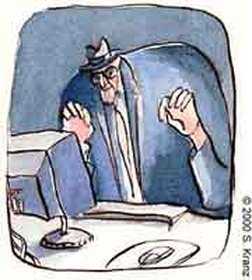 A dear friend of mine runs a website called www.moshiach.com. One thing he gets is lots of mail, much of which actually gets answered. With his kind permission (and the kind permission of his correspondent), I would like to reproduce one such exchange:

As someone who was raised in the Reform community, and was told as a young child that there is no Messiah and no Heaven... I wonder if I will ever be truly able to believe in Moshiach. It seems that there is a strong influence of what I was taught as a child. Will I ever be able accept this concept without doubt?

We are all conditioned by our upbringing to be receptive to certain words and catchphrases, and to be resistant towards another set of words and catchphrases. In the environment in which you grew up, "Moshiach" was an alien, or even negative, term. But these are only words. If you go beyond the words, and think about what they really mean, you will find that their meaning is shared by every community and every family. You will find that you are in fact most receptive to it.

Ask yourself: Do you believe that we can do better? That every human being, deep down, wants to, and can, be better, kinder, more noble, than he/she is? Think about your own behavior: how many times, in the wake of doing an unkind or otherwise negative thing, have you consoled yourself by saying "That's not the real me"? Well, if you think so, then it stands to reason that other people--perhaps even all people--also think so, doesn't it?

Ask yourself: Are you outraged by the cruelty and evil in our world? Does not this outrage reflect a deep-seated belief that things don't have to be this way? That we--all of us--are capable of better? Because if not, then there's really nothing to get upset about. If the world is evil, then that's just the way things are. But we all know that this is not so. We all know that the world is intrinsically good. Hence our frustration and anguish when it doesn't act that way.

Do you think that your life is purposeful? Do you think that there's a reason why you're here? Of course you do! If you didn't, why do you bother getting out of bed in the morning? Why do you bother grappling with all the obstacles, great and small, that life sends your way? And are you the only one who gets out of bed in the morning? Billions of people do it every day! Obviously, they all believe something: they believe that all this is going somewhere, and someday we're going to get there!

For thousands of years Jews have had a word for all this. They called it "Moshiach." Unfortunately, two things happened that made it an alien word for many of us. One thing that happened was that we drifted away from the knowledge and wisdom that our grandparents have been carrying with them for 4000 years, so that we forgot what many of the words really meant. And even before that happened, the word "Moshiach" or "Messiah" was wielded by a faith which sprang from ours, and then decided to slaughter us and persecute us so as to convince us to join them. So the word lost its meaning, on the one hand, and gained a negative meaning, on the other.

So don't think about the word. Think about what you believe, what you know deep down to be true.