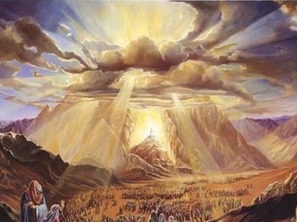 The breakthrough
"And it came to pass on the third day, when morning came, that there were thunders and lightenings, and a thick cloud upon the mountain, and the sound of the shofar exceedingly loud; and the entire people within the camp trembled. And Moses brought the people out of the camp to meet with G-d, and they stood at the foot of the mountain...


The most momentous event in history took place on Shabbat, the sixth day of the month of Sivan, in the year 2448 from creation (1313 bce). On that day, the entire people of Israel -- more than 2 million men, women and children, as well as the souls of all future generations of Jews -- gathered at the foot of Mount Sinai to receive the Torah from G-d. Ever since, the event has been marked on our calendar as the festival of Shavuot,"the Time of the Giving of Our Torah."

But the Torah we received at Sinai had already been in our possession for many generations. Our ancestors had studied and fulfilled the entire Torah even before it was given, observing its every law and ordinance -- including the obligation to make an eruv tavshilin when a festival falls on the eve of Shabbat. No new document was unveiled at Sinai, and no hitherto unknown code of behavior was commanded there. What, then, was given to us at The Giving of Our Torah?

The Midrash explains the significance of the event with the following parable:

Once there was a king who decreed: The people of Rome are forbidden to go down to Syria, and the people of Syria are forbidden to go up to Rome. Likewise, when G-d created the world He decreed and said: "The heavens are G-d's, and the earth is given to man." But when He wished to give the Torah to Israel, He rescinded His original decree, and declared: The lower realms may ascend to the higher realms, and the higher realms may descend to the lower realms. And I, Myself, will begin -- as it is written, "And G-d descended on Mount Sinai, and then it says, "And to Moses He said: Go up to G-d." (Midrash Tanchuma, Vaeira 15; Midrash Rabbah, Shemot 12:4)

For the first twenty-five centuries of history, there existed a gezeirah -- a decree and schism -- which split reality into two hermetic worlds: the spiritual and the physical. The spiritual could not be truly brought down to earth -- its very nature defied actualization; nor could the physical be made transcendent and divine -- its very nature kept it imprisoned within the finiteness and mortality of the lower realms. So Torah, the divine wisdom and will, could have no real effect upon the physical world. It was a wholly spiritual manifesto, pertaining to the soul of man and to the spiritual reality of the heavens. While its concepts could, and were, applied to physical life, physical life could not be elevated - it could be improved and perfected to the limits of its potential, but it could not transcend its inherent coarseness and subjectivity.

At Sinai, G-d revoked the decree which had confined matter and spirit to two distinct realms. G-d came down on Mount Sinai, bringing the spirituality of the heavens down to earth. He summoned Moses to the top of the mountain, empowering physical man to raise his physical self and world to a higher state of existence. The Torah could now sanctify physical life.

This encounter between G-d and man at Sinai introduced a new phenomenon: the cheftza shel kedushah or holy object. After Sinai, when physical man takes a physical coin, earned by his physical toil and talents, and gives it to charity; or when he bakes flour and water as unleavened bread (matzah) and eats it on the first night of Passover; or when he forms a piece of leather to a specified shape and dimensions, inserts into it parchment scrolls inscribed with specified words, and binds them to his head and arm as tefillin -- the object with which he has performed his mitzvah (divine commandment) is transformed. A finite, physical thing becomes holy, as its substance and form come to embody the realization of a divine desire and command.

The mitzvot could have been, and were, performed before the revelation at Sinai. But because they had not yet been commanded by G-d, they lacked the power to bridge the great divide between matter and spirit. Only as a command of G-d, creator and delineator of both the spiritual and the physical, could the mitzvah supersede the natural definitions of these two realms. Only after Sinai could the mitzvah actualize the spiritual and sanctify the material.

[Thus we find that when Abraham required his servant Eliezer to take an oath, he told him to "place your hand under my thigh." An oath is taken while holding a sacred object such as a Torah scroll or tefillin; here Abraham is telling Eliezer to swear on the part of his own body sanctified by the mitzvah of circumcision. But since Abraham "observed the entire Torah even before it was given" -- i.e., he studied Torah, put on tefillin, affixed a mezuzah on his doorpost -- it would seem that he had no shortage of sacred objects available to him. Why, then, did he have Eliezer place his hand under his thigh, contrary to all common standards of modesty and propriety? But as we said, the effects of Abraham's pre-Sinai mitzvot were of a wholly spiritual nature. Since G-d had notcommanded him to do them, they remained subject to the law that separated the supernal from the material; while they had a profound effect on his own soul, the souls of his descendants, and the spiritual essence of creation, they had no impact on the material substance of the universe. The single exception was the mitzvah of circumcision, which G-d did command to Abraham (as related in Genesis 17), imparting to this mitzvah something of the nature of the post-Siniatic commandments of the Torah.

Therein lies the significance of a curious detail related by our sages regarding the revelation at Sinai.

The Torah tells us that G-d spoke the Ten Commandments in "a great voice, which did not cease" (Deuteronomy 5:19). The Midrash offers a number of interpretations for this description of the divine voice. One interpretation is that the divine did not confine itself to the holy tongue but reverberated in mankind's seventy languages. A second meaning is that the voice did not cease on that particular Shabbat morning some 3300 years ago: throughout the generations, all the prophets and sages who prophesied, taught and expounded upon the wisdom of the Torah are the extension of that very voice, for they added nothing that was not already inherent in the Ten Commandments. Finally, the Midrash offers a third explanation of the voice's "unceasing" nature: the divine voice at Sinai was unique in that it had no echo.

The first two interpretations obviously point to the universality and timelessness of Torah. But what is "great and unceasing" about a voice that has no echo? Why should the divine voice at Sinai have been distinguished in this manner from all other sounds?

In truth, however, the echoless nature of the divine communication conveys the very essence of what transpired at Sinai. An echo is created when a sound meets with a substance which resists it: instead of absorbing its waves, the substance repels them, bouncing them back to the void. Prior to Sinai, the voice of Torah had an echo. Belonging to the spirituality of the heavens, it could not truly penetrate the physicality of the earth. The world might hear of Torah and be affected by it; but there remained a certain degree of resistance, as the Torah and the physical world each remained defined by their respective "higher" and "lower" realms. At Sinai, however, G-d rescinded the decree which had severed the heavens from the earth. The world could now fully absorb the divine voice; a physical object could now become one with its mission and role.

Therein lies an important lesson to us as we pursue our mission in life to implement the ethos and ideals of Torah in our world.

At Sinai we were charged to serve as "a light unto the nations" -- to actualize in our own lives, and to teach all of humanity, that no matter what the conditions of a particular time, place or society may be, there is an all-transcendent, unequivocal, divinely ordained truth and moral code of behavior to which to adhere.

At times, we might be confronted with a seemingly unresponsive and even resisting world. It may appear that one or another of the Torah's precepts does not fit in with the prevalent reality. So the Torah tells us that the voice which sounded G-d's message to the world had no echo.

The voice of the Ten Commandments permeated every object and reality in the universe. So any resistance we may possibly meet in implementing them is superficial and temporary. For at Sinai, the essence of every created being was made consistent with, and wholly receptive to, the goodness and perfection which G-d desires of it.

From the teachings of the Lubavitcher Rebbe