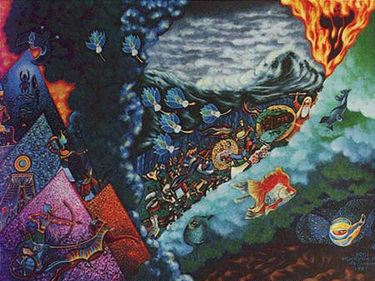 In At The Deep End

In this week's Parshah the Red Sea splits and the children of Israel cross to safety.

G-d tells Moses: "Speak to the children of Israel, that they go forward..."

The Midrash tells us that as they stood at the shore of the sea, the people of Israel split into four factions.

These four factions represent four possible reactions to the daily situation we find ourselves in where our mission in life is challenged by the dominant reality.

"Let us cast ourselves into the sea." Let us submerge ourselves within the living waters of Torah, the sea of piety, the sea of religious life. We can create our own insular communities, protecting us and ours from the G-dless world out there.

At the opposite extreme, "Let us return to Egypt." We must accept "reality," acknowledge that the Pharaohs are the ones who wield the real power in the "real world." We'll do whatever we can under the circumstances, but it is pointless to think that we can resist, let alone actually change the way things are.

A third reaction is "Wage war against them" –- we should assume a confrontational stance against the hostile reality, taking on the "unG-dly" world against all odds.

A fourth reaction is to say "It's wrong to abandon the world, it's wrong to succumb to it, and it's wrong to fight it. The real answer lies in dealing with it in a spiritual way." After all, a single prayer can achieve more than the most secure fortress, the slickest diplomat or the mightiest army.

G-d rejected all four approaches. Each of them has their own time and place -– but none of them is the vision to guide our lives and define our relationship with the world we inhabit.

Faced with hostility or indifference, our response can be to "go forward" –- to press on, regardless. Not to escape reality, not to submit to it, not to wage war on it, not to deal with it only in a lofty, spiritual manner, but to go forward. To do another Mitzvah, connect with our roots in some way, take one more step toward our goal.

When we move forward, we will come to realize that those seemingly insurmountable barriers are, in fact, easily removed. We will realize that the prevalent "reality" is not so real after all, and that it is very much within our power to reach our goals.

When Moses told the children of Israel to jump into the sea, nobody wanted to go first until a person called Nachshon ben Aminadav jumped in, paving the way for everybody else to follow. Then, of course, the miracle occurred and the sea split for everyone.

Often we need a "Nachson ben Aminadav" to help us, to lead us to take the plunge. It is always harder to be the first one. On the other hand, perhaps it is not so far beyond our capabilities to take the initiative ourselves, to lead others and to sometimes be that "first one" to jump in.