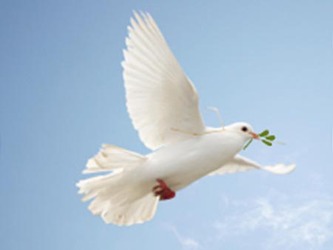 A Modern World and Ancient Prophecies
In the 19th century and much of the 20th, war was a game for the players. Territorial invasion and imperialism were considered fair play; the fittest deserved to survive. On European soil, peace was maintained through a delicate balance of power, and when that power shifted, ammunition broke loose. World War I racked up a death toll of 15 million, all in a dispute over power and territory. By the end of World War II, the death toll was at a shocking 78 million.

It became common sense to use war only as a last resort. Yet in 1990, when Saddam Hussein invaded Kuwait to solve Iraq's financial problems, the world was outraged. That kind of move was not considered cool anymore. Something had changed in our moral perceptions.

The United Nations provided a novel means for conflict resolution. Established in 1945, its platform was to provide a space for dialogue between nations and minimize the need for war. Whilst for time immemorial, war had seemed like a natural resolution for disputes, it had become common sense to use war only as a last resort.

The Lubavitcher Rebbe spoke of the formation of the United Nations as a harbinger to the era of Redemption. He pointed out that the wall that stands in front of the UN building is engraved with the words "And they shall beat their swords into plowshares..." quoting Isaiah's description of the era of Redemption. The world has been refined, said the Rebbe, to the extent that a mindset of peace and aid to the less fortunate has become common sense to so many.

In February of 1992, a conference took place with representatives from many powerful nations. At the end of the conference the leaders resolved to cut back on arms productions and redirect these resources to increase food production. Again the Rebbe noted the very tangible manifestation of Isaiah's prophecy, turning swords into plowshares. And the prophecy continues to unfold. Satellites that were developed in order to spy on the enemy from thousands of miles away are now used to detect the resources beneath the earth's surface and develop new areas for agricultural growth. Millions of dollars of defense research budget are being used to take military technology and transfer it for commercial use.

It makes so much sense. An idea that once seemed illogical that is now so sensible.

The Torah alludes to the shift in ethical sensibility in the opening sentence of the Torah reading of Mishpatim, the portion that discusses many of G‑d's logical commandments.

"And these are the ordinances that you shall set before them."

The Midrash (quoted by Rashi) exposes an insight based on the first two words of the sentence "And these":

The Torah includes the seemingly superfluous "and" to emphasize that these sensible ordinances were also from Sinai. Meaning, lest you think that these laws are a code of ethics that was generated by the human conscience, G‑d clarifies that they were personally designed by G‑d just as were the "illogical" laws. The only difference: with regards to the logical mitzvot, G‑d gave us the gift to be able to understand their rationale, as opposed to the other mitzvot which we are not privy to understand.

We naturally assume that Jewish rituals are either sensible, like giving charity and respecting our parents, or illogical, like keeping kosher or immersing in the ritual bath. But here, G‑d challenges our natural assumptions. "These too are from Sinai"—all the mitzvot are generated from a single source, G‑d's will and wisdom. He fashioned our minds to comfortably comprehend one part of His will and not the other; the latter He asks us to do because we love Him, not because we understand Him.

But as we travel down the time continuum, moving closer to the era of Redemption, our minds become more in sync with G‑d's wisdom. His will becomes more natural. For example, G‑d says to respect boundaries, but for as long as history has been recorded, empires have swallowed up weaker nations as they ascended in power. It was the game of politics. If they tried that today, the UN would send in a major peacekeeping mission to keep the bully in check.

G‑d says to help others who are in need. Well, for almost all of history this was largely incomprehensible. Why would we invest our hard-earned resources in a country that is of no benefit to us? Let them take care of their own problems. Yet now it's almost instinctive; someone else is hurting and I need to open up my purse. After the devastating earthquake in Haiti in January of 2010, America sent thousands of troops to Haiti and promised $100 million in recovery funds. Globally, more than one billion dollars in aid have been pledged by various governments. Israel's rescue mission to Haiti is costing its government NIS 40 million. US individuals and businesses donated millions of dollars to the Red Cross's philanthropic efforts to help Haiti victims.

Would the response have been comparable two centuries earlier, even a century earlier?

The Rebbe said that we are at the brink of a global transformation, and soon the world will become a wonderful place. We are moving this process along by being good today. It just makes sense.

Based on a talk by the Lubavitcher Rebbe, adapted by Rochel Holzknner